Vancouver, B.C., January 30, 2018 – Titan Mining Corporation (“Titan” or the “Company”) (TSX:TI) is pleased to announce that the crusher, hoist and mill at the Empire State Mine have been commissioned and hoisting of ore has begun on schedule and budget.

Since the start of the project in early November 2017, the workforce on site has grown from 24 to 162 people, including contractors, with 83% living locally. The total workforce is expected to ramp up during 2018 to more than 190 people.

The underground crusher refurbishment, which was on the critical path, was completed on time, allowing for the 3,800 ton per day shaft to commence hoisting activity. The rehabilitation of the underground mine is well advanced, with over 26,000 feet completed since the start of the project. Initial development to access new stopes has begun, and production will be sourced from drilled long-hole stopes and early development ore. Refurbishment of mobile equipment is proceeding well, with over 85% of the support fleet fully operational, and work on production equipment is expected to advance through the quarter as throughput ramps up.

Wet commissioning of the 5,000 ton per day mill was completed following the re-line of the rod mill, and the initial zinc concentrate is expected on schedule in February.

“When we are fully ramped up in early 2019 to our Phase 1 throughput level of 1,800 tons per day, the mine is forecast to produce an average of 100 million pounds of zinc in concentrate per year, but our goal is to increase this to 225 million pounds or more annually by expanding throughput,” said Keith Boyle, Chief Operating Officer.

In order to execute on this growth strategy, exploration in and around the mine infrastructure will focus on historic resources and reserves, remnants and zone extensions. Regional exploration activities will focus on analyzing data around historic operations, drilling of known geological and geophysical targets, and the generation of new drill targets in the district through data analysis and field work.

An inventory of the extensive vault of historic exploration and mining data is largely complete, and digitization and integration of this information into modelling software is well underway. Of top priority, a district scale lithostructural interpretation, 3D geologic models of historic mines, and a robust database for historic diamond core drill logs and geochemical data will be produced from the digitization of the data and compilation of the more than 200,000 archived files.

“We are excited about the opportunity to explore this historic zinc district and have a high degree of confidence that we will be able to find and develop new deposits,” said Michael Kirschbaum, Exploration Manager. “The 100 years of extensive data available to us, including 800 kilometers of drill core, represents a potential treasure trove of targets. Coupled with modern exploration techniques and software, we expect to emulate the discovery success experienced by other companies who have pursued similar strategies.”

Mr. Kirschbaum added: “In addition to the current operation at the Empire State Mine, there are six former mines on the property, and we have identified remnant material which has potential for economic extraction using our existing infrastructure. The district is underexplored and there is excellent potential for new discoveries both in and around the current and former mines, as well as regionally.”

Figure 2. Titan Land Position: >80,000 Acres in a Historic Mining District which Hosts the Empire State Mine, Currently Being Restarted, and Six Former Mines with Exploration Upside and Potential to Leverage Existing Infrastructure 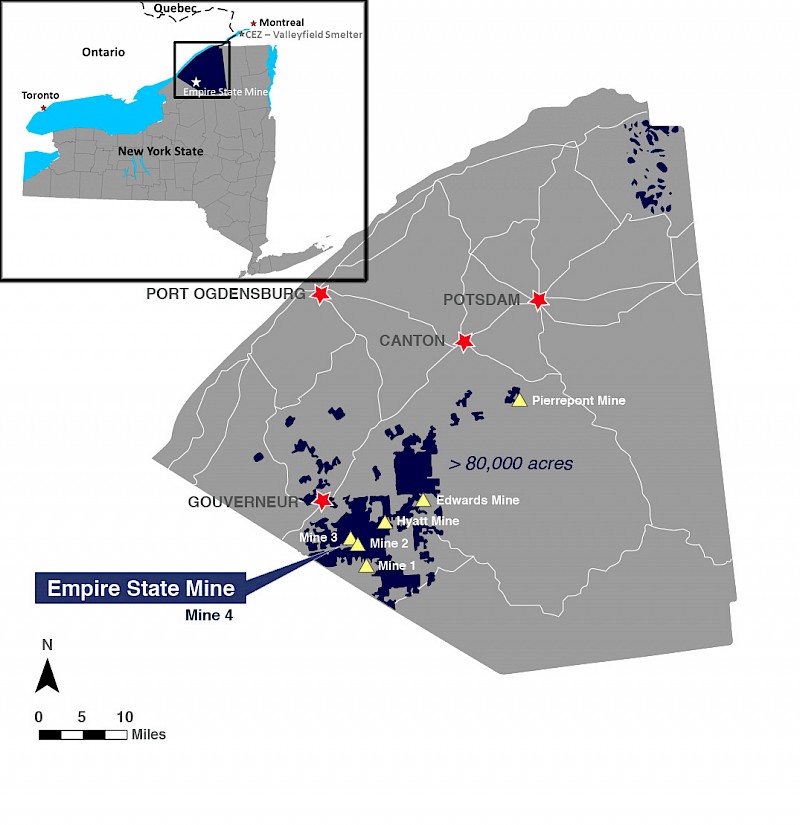 The technical information within this press release has been reviewed by Keith Boyle, P.Eng, Chief Operating Officer for Titan Mining Corporation, a qualified person as defined by National Instrument 43-101 (NI 43-101).

Titan is a Canadian-based zinc exploration and development company with its principal asset being the Empire State Mine in the State of New York. For more information on the Company, please visit our website at www.titanminingcorp.com.

This press release contains certain forward-looking statements. Words such as “expects”, “anticipates” and “intends” or similar expressions are intended to identify forward-looking statements. Forward-looking information is necessarily based on a number of opinions, assumptions and estimates that, while considered reasonable by the Company as of the date of this press release, are subject to known and unknown risks, uncertainties, assumptions and other factors that may cause the actual results, use of proceeds or timing of events to be materially different from those expressed or implied by such forward-looking information, including but not limited to the factors described in greater detail in the “Risk Factors” section and other sections of the final prospectus available at www.sedar.com. No securities regulatory authority has expressed an opinion about the securities described herein and it is an offence to claim otherwise. Titan undertakes no obligation to publicly update or revise any forward-looking statements, whether as a result of new information, future events or otherwise, except as may be required by law.